skip to main | skip to sidebar

Don't believe that burying a St. Joseph statue will help you sell your home? Some do, and it's becoming a service that one realtor offers with her listings.

During times when homes don't resell quickly some sellers will try the practice that others might call a superstition. "The practice of burying St. Joseph borders on superstition today", said Stephen Lewandowski, the deacon of St. Joseph's Catholic Church on Poole Road in Raleigh. "And superstitions, such as believing in good-luck charms or that black cats bring bad luck, are no-nos", he said. "It's not really sanctioned by the church," Lewandowski said.

In 2005, we were trying to sell a small home left to my wife and her brother in a market where there were lots of houses for sale and not many were moving. We heard of the practice of burying a St. Joseph statue upside down in the yard and thought that it couldn't hurt since the house was not moving anyway. After digging around for a suitable spot in an area in front of the porch (and looking over my shoulder to see if anyone was looking) I buried the little statue we had bought just to see if it would help a couple of feet from the house, upside down and facing backwards. Just like we were told it had to be done.

Interestingly enough, in the next few weeks we actually got more visits and got a couple of offers. All when houses in the area still were not selling. One of the potential buyers became interested in the house and we negotiated until arriving at an agreeable selling price and the house was sold in a few days!

Call it superstition, coincidence, blind luck or whatever you wish... the house was not drawing buyers until we decided to bury the St. Joseph statue. Then with a little added help the house sold!

Read more about this fascinating possibility...

When Meredith and Will Vaughn put their home on the market a year ago, they were certain it would sell quickly.

The townhouse is in the popular Five Points neighborhood near downtown Raleigh, where buyers were getting into bidding wars over nearby houses.

Days went by. Then weeks. Then months. The Vaughns, carrying two mortgages, needed a miracle.

"We were already praying," said Meredith Vaughn, 29, who has since moved to Martinsville, Va., where she and her husband will be closer to family when their first baby is born in March. "But we thought: If we do something tangible, maybe that would help, too."

They turned to St. Joseph, who is considered by many desperate home sellers and real estate agents to be the patron saint of house hunters and sellers.

The Vaughns bought a 4-inch St. Joseph statue and followed the instructions: Dig a hole, bury the statue upside down, say a special prayer and wait for an offer.

Several months later, they're still waiting for an offer. "But we've had a lot of people look at it," Meredith Vaughn said.

Desperate times call for desperate measures. And as home sales have slowed locally and across the country, more sellers are taking similar leaps of faith.

Rows of St. Joseph packages that proclaim "Faith can move mountains ... and homes!" hang on a wall at the Raleigh Regional Association of Realtors store in Cary, where real estate agents stock up on "for sale" signs, key boxes and the like. Read more...

Posted by Carolina Bits at 12:06 PM No comments: Links to this post

On a spring day in Virginia 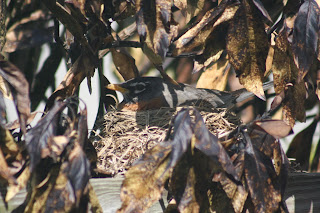 On a spring day in 2007 while visiting in Virginia, I happened to spot a Robin sitting on her nest along the top of a fence beside my son's home. She sat there long enough for me to capture this image, all the while watching me to be sure I would not disturb her nest full of eggs.

A couple of weeks later my son told me the eggs had hatched, and from an upstairs window they could see the little babies when the mother was feeding them. A short time later the babies became small birds and left the nest to join their mother and father.
Posted by Carolina Bits at 2:58 PM No comments: Links to this post 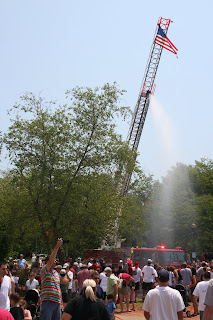 Each year the Parks and Recreation Department of the Town of Apex, NC, has a "just for kids" parade on July 4th. Vendors line the streets with inflated slides and rides for the children and others have tents offering food or wares for the occasion. The downtown area is packed with residents and visitors from all around just wanting to get out and celebrate the day. At high-noon all the kids that care to participate line up at the center of town on Salem Street to join a procession through the historic downtown with their costumes, wagons, bicycles and tricycles and all sorts of home built outfits to celebrate the day.

This year over 500 children participated in the big event!

A traditional last stop for all the kids is at the parking lot of the old restored train depot where one of the town fire trucks sets up to spray a fine cooling mist on all that want to run under it!

Posted by Carolina Bits at 4:14 PM No comments: Links to this post

Fly on the wall